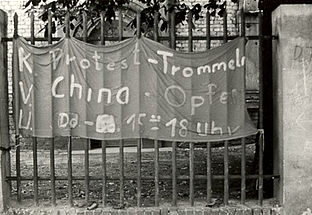 In the run-up to the Peaceful Revolution in East Germany, St. Elisabeth’s was one of the churches that provided protection for rebellious young people, political dissenters, critical artists and opposition activists. In January 1989 some of them began meeting here in a self-organised church community, called the Church from Below. The group was part of a nationwide network of social projects in the Protestant churches called Open Work. Its activists played a key role in the protest demonstrations up to the revolution and in new grassroots movements, parties and initiatives.