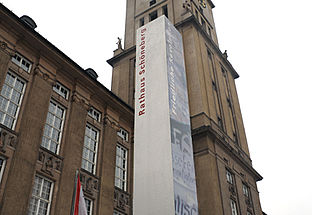 After World War II, Berlin became a focal point in the conflict between the communist East and the democratic West. In 1948 this resulted in the city being divided into two administrative sectors. The West Berlin senate and parliament set up their headquarters in Schöneberg Town Hall, with the square outside the town hall becoming a site for important political rallies. It was here that US President John F. Kennedy held his famous Berlin speech on 26 June 1963. The Liberty Bell in the tower – a gift from the USA – commemorates the will to defend democracy and human rights.