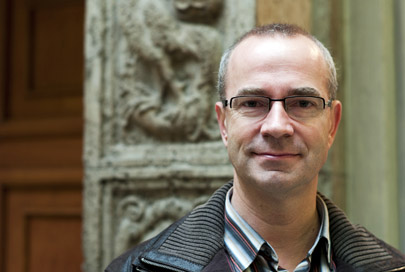 The name ‘Läßig’ comes from the German word for ‘casual’ – yet there is nothing casual about him. He normally looks very smart indeed. As to be expected of a lawyer. There is a lot of water under the bridge since he sang songs against the Socialist Unity Party (SED) system on the streets of Leipzig as a long-haired, bearded revolutionary. “The real cause of the revolution was the apathy of the system. It was just standing there like a house of cards asking to be knocked down. And we were the ones who did it – the civil rights activists,” says Läßig.

Jochen Läßig became one of the leading figures in the Peaceful Revolution. He studied theology in Halle, was excluded and then continued his studies at Leipzig Theological Seminary. The young man deliberately withdrew into a course of spiritual studies without seriously considering wanting to become a pastor. In January 1989, Läßig took part in a spectacular campaign by the civil rights movement. In Leipzig as well as Berlin, the SED state commemorated the murder of Karl Liebknecht and Rosa Luxemburg. The new revolutionaries called for their own demonstration and distributed 10,000 flyers, in keeping with Luxemburg’s motto “Freedom is always the freedom of those who think differently”. On 15 January, there was the biggest demonstration Leipzig had ever seen up until the turbulent autumn of 1989. A good 800 people participated in this. The police broke up the ‘illegal gathering’ and arrested 53 demonstrators, including Läßig.

In retrospect he is unperturbed even by this story, “ludicrous interrogations, no torture”. How did they find the courage to revolt against an apparently omnipotent system? “We had nothing to lose since we had no career prospects anyway. I didn’t know what to do – become a caretaker or a boilerman? Or go to the West?”
Läßig earned his living as a street musician. Passers-by were shocked anyone could sing Georg Danzer’s song Die andere Seite (The Other Side) in the GDR. Läßig says “The song actually describes the life of a dropout. At the time, however, everyone understood the ‘other side’ to mean behind the Wall.”

On 10 June 1989, Läßig organised a street music festival in Leipzig without state approval. Twenty groups played. 1,000 uniformed police officers and the same number in plain clothes took action against the musicians and loaded them onto trucks. The festival was a great success – and the instigator was not taken into custody. Läßig was just ordered to pay a fine of 1,000 marks. The autumn events ensured that he did not have to pay that.

Jochen Läßig was no silent revolutionary; his Stasi file identified him as Operative Procedure ‘Trumpet’, meaning he was subject to clandestine persecution tactics. He remained politically active after 1989, served on the city council and caused another stir when he publicly attacked German President Richard von Weizsäcker in the Church of St Nicholas in 1990 for his alleged involvement in arms deals. It was about this time the revolutionary sensed that he was being intellectually ousted. His microphone was switched off. A few years later, however, he was honoured for his achievements.