At the Stasi headquarters in Berlin-Lichtenberg 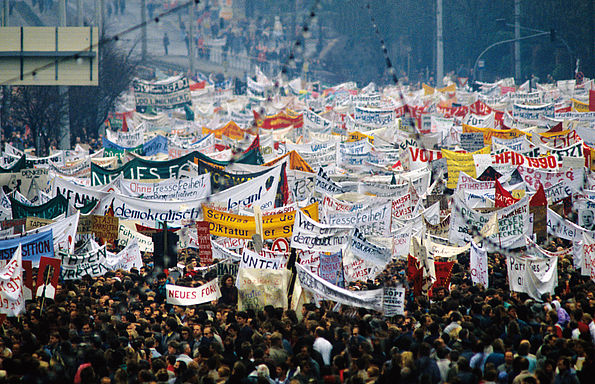 Berlin, 13 June 2016 – How did the Peaceful Revolution come about? What prompted the fall of the Wall and what stages took place on the road to German unity? The Robert Havemann Society’s open-air exhibition “Revolution and the Fall of the Wall” opens in the presence of Prof. Monika Grütters, Minister of State for Culture and the Media, Tim Renner, Permanent Secretary for Cultural Affairs Berlin, and Birgit Monteiro, Mayor of Berlin-Lichtenberg, at the Stasi headquarters in Berlin-Lichtenberg on Wednesday, 15 June 2016 at 11:30 am. An extensive opening programme takes place on the site from 17 to 19 June.

The bilingual (German/English) permanent exhibition in the courtyard of the Stasi headquarters documents the most important stages of the Peaceful Revolution in the GDR – from the earliest protests to the fall of the Berlin Wall and, finally, German unity. Over 650 fascinating photos, historical documents and films prompt discussion of the fundamental changes in East German society and recall the moving moments of the successful fight for freedom. The multimedia exhibition focuses on the activists of the time. It traces the complex process of self-liberation and shows the changing motives and aims behind it.

A bilingual audio guide provides a tour of the exhibition. The exhibition content, up-to-date information and background material are all available on the website www.revolution89.de. The open-air exhibition is open around the clock every day, from 15 June. Entrance is free of charge.

17 June 1953: anniversary of the first demonstration for freedom in the GDR

The exhibition opening coincides almost exactly with the anniversary of 17 June 1953, the date of the popular uprising against the SED dictatorship in the GDR. The protests, which spread across the whole of East Germany, were brutally suppressed. In the autumn of 1989/90, the revolution for freedom succeeded by peaceful means, changing the face of Germany, Europe and the world.

Permanent exhibition at a historical site

The permanent exhibition is located in a historical site at the East Berlin Stasi headquarters. Up until 1990, this complex housed the main offices of the GDR’s secret police, twice a key location for the revolution after the fall of the Wall. In January 1990, demonstrators stormed the complex, previously hermetically sealed off from the public. The buildings were occupied anew several months later, this time to force the opening of the Stasi files.

Project manager and curator Tom Sello: “The site thus also stands for the beginning of a democratic process and for the question of ‘How do we deal with the past?’ This was an issue discussed at the Central Round Table, which made key resolutions including the dissolution of the Stasi. The Stasi headquarters also saw the fight for the opening of the Stasi files. All this makes the complex a very worthy location for the permanent exhibition.”

In the Stasi Museum and the archive of the Stasi records authority, visitors to the complex can already find out how the GDR’s secret police worked and how they supported the SED’s rule. The new exhibition grants a different view of the period and tells the story of how the communist dictatorship was defeated.

The exhibition’s contours and colours also form a deliberate counterpoint to the courtyard and the surrounding listed buildings with their grey façades. The wave-shaped arrangement of the exhibition walls contrasts with the strict lines of the architecture, with the use of colour reinforcing that contrary effect. “We wanted to underline that aspect,” says curator Stefanie Wahl, “being colourful, being free, being expressive in a certain way, like in the Peaceful Revolution – providing something very different to counter the apparatus of violence.”

Opening programme from 17 to 19 June

An extensive opening programme takes place from 17 to 19 June 2016, with hourly guided tours of the exhibition by witnesses to the revolution and tours of the Stasi archive and the complex. The highlight of the weekend is a special concert by “Speiche and Friends” at 7 pm on 17 June, featuring one of the most successful East German blues bands.

Audio guides can be loaned from the information desk in the complex between 10 am and 5 pm.

Information at a glance

·         Photo material for free use in editorial reporting

Open-Air Exhibition “Revolution and the Fall of the Wall”

The exhibition is a project of the Robert-Havemann-Gesellschaft e. V. It is funded by the Federal Government Commissioner for Culture and the Media, on the basis of a resolution passed by the German Bundestag, as well as by the Berlin Lottery Foundation and the borough of Lichtenberg.

The GDR Opposition Archive collects, maintains and provides material on opposition and resistance against the communist dictatorship in the Soviet-Occupied Zone/GDR. It is one of the most significant archives on the history of opposition in East Germany. The archive is run by the Robert Havemann Society, and also produces publications on opposition history and organises educational exhibitions, events series and seminars.