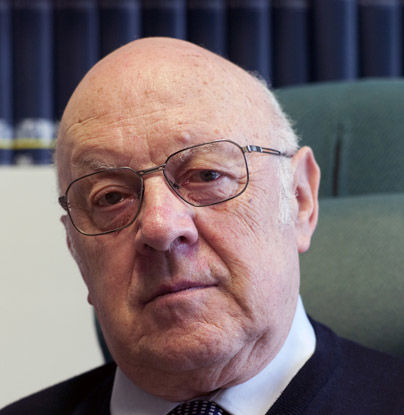 If anyone were to ask the Cologne-based journalist Karl Wilhelm Fricke how he saw his own part in the success of the East German revolution of 1989, he would answer with surprise that he had only informed people impartially of what went on. Yet for decades, he reported more than almost any other West German journalist on the GDR, the political criminal justice system, the Stasi and the opposition and resistance. He was the famed lone admonisher crying in the wilderness. Hundreds of radio features, mainly on Deutschlandfunk, where he was a senior editor from 1970 onwards, a dozen books, hundreds of essays, another thousand newspaper articles and a whole series of films – an absolutely incredible output – testify to that role.

Karl Wilhelm Fricke had a unique connection to the GDR. In 1946 he witnessed his father Oskar Karl’s arrest by the Soviet secret police. Later, his innocent father was sentenced to twelve years in a penitentiary during the notorious Waldheim trials. He died behind bars in 1952.

Karl Wilhelm Fricke fled to the West in February 1949, as he too was also about to be arrested without reason. He had already been taken to a police station but managed to escape. He began publishing articles on events in the ‘Eastern zone’ in 1950; the first was about the Waldheim trials.

On 1 April 1955 the Stasi abducted Karl Wilhelm Fricke in West Berlin; in July 1956 he was sentenced to four years’ imprisonment for alleged espionage. He served every single day of his sentence in a penitentiary. The Stasi arrested his mother Edith on 6 April 1955, claiming she had been aware of and supported his activities. She was given a two-year sentence in February 1956. Fricke’s fiancée Friedelind waited patiently for him all the years. The couple celebrated their golden wedding anniversary in the twentieth year after the fall of the Wall.

In the decades up to 1989, Karl Wilhelm Fricke became a voice of the East, reporting in the West about the East and thereby informing the East about the East. He accompanied the 1989 revolution with numerous commentaries, radio programmes and features. He is an exceptional character. Over the past two decades, he has been active on many committees, including in the Hohenschönhausen and Bautzen prison memorial centres. He was an expert member of the two parliamentary enquiry commissions on the history and consequences of the Socialist Unity Party (SED) dictatorship in Germany. Numerous awards and honours testify to the esteem he is held in across all party lines. Although he had good reason to sow hate and anger, Karl Wilhelm Fricke was at all times clear and appropriate, showing incorruptible judgement but never unfair, unjust or unobjective. That earned him even the respect of his political opponents.