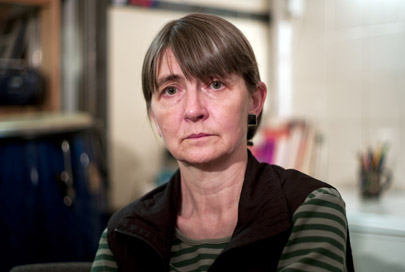 Lilo Fuchs still enjoys a good joke, loves laughing with her children, despite all her earnestness and after all she has experienced. At the end of August 1977, she and her young daughter Lili left Grünheide for West Berlin. A few days beforehand her husband, the writer Jürgen Fuchs, had been expelled to West Berlin from the Stasi remand prison in Berlin-Hohenschönhausen. He had been arrested after Wolf Biermann’s expatriation in November 1976. Lilo Fuchs was still young when she left the GDR, only 24 years old.

She and her younger sister Gisela grew up in a basement flat in Jena; their parents were displaced persons from East Prussia. Lilo was a good student. She enjoyed music, singing in a choir and playing the piano. After school she studied Psychology in Jena. Her fellow student Jürgen Fuchs had begun writing texts that dealt with the mechanisms of suppression in East German society, and the Stasi had him in their sights. The couple married in the autumn of 1974, still students.

The following year, Jürgen Fuchs was expelled from university because of his critical writing. The family left Jena very suddenly, almost fleeing the city. Wolf Biermann picked them up in his car and took them to Grünheide, where they lived in Katja and Robert Havemann’s garden house. After her husband’s arrest in November 1976, Lilo Fuchs was escorted at close quarters by Stasi observers everywhere she went. She lived this way for the nine months until she left the country.

The East German secret police continued to persecute the family in West Berlin up until the autumn of 1989. The GDR did not let them go, in various respects. Lilo and Jürgen Fuchs supported the GDR opposition from the West, steadfast and constantly throughout the twelve years. She arranged for books, newspapers and texts to be smuggled into the GDR, passed on news of arrests, called attention in the West to human rights violations in the GDR and Eastern Europe. Their flat in Tempelhof, directly opposite the airport, was a meeting point for opposition activists driven out of the GDR. They all received a friendly welcome, advice and moral support for their arrival in the West. And they brought the latest information from the East with them. The questions and problems were always the same. Discussions lasting hours and whole nights were all about how to help their friends in the East. Even more important than material help was moral support. The couple forged contacts and gained publicity in the West for voices from the GDR. In the midst of all this excitement, Lilo Fuchs remained a reliable pole of calm.

She is now a psychologist working at a psycho-social contact and advice bureau in Berlin-Moabit.