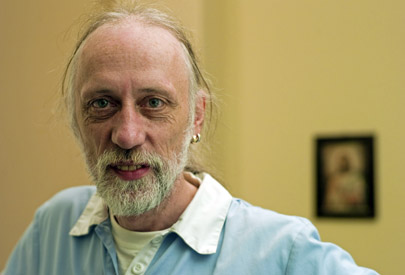 In the autumn of 1989, what began as a rather modest number of demonstrators on the Monday of the city’s major trade fair grew four weeks later into the mass movement that eventually led to the fall of the Berlin Wall on 9 November. Udo Hartmann was at the forefront of that first demonstration. Unlike thousands of others, he did not want to leave the country; no, Leipzig and its maltreated surroundings were his home, the place he wanted to renew. Socialism with a human face was what Hartmann wanted. And above all he wanted to travel to other parts of the big wide world. That was why he carried a placard with the slogan “Against the stream – Free travel for all” around the centre of Leipzig on that 4 September.

On that Monday, the state apparatus was restrained in the face of the world media attention for the international trade fair. The demonstrators had their placards torn down, but no-one was arrested. Hartmann: “It was certainly strange. When they ripped down my placard, it got tangled around my wrist. They pulled me out of the demo. But they weren’t interested in me at all. They just untangled the placard from my hand – and then they were gone.”

To make up for it, the Stasi and police were all the more brutal at the next Monday demonstration a week later. Almost 100 people were arrested, including Udo Hartmann. He was in prison for four weeks, even missing the decisive day when 70,000 peaceful demonstrators pulled the rug out from under the Socialist Unity Party (SED) on 9 October.

In Stasi custody, Udo Hartmann barely heard a word about how the Leipzig Monday demonstrations developed. “But then all of a sudden it went quiet in the jail, because we heard chanting from outside. That was great, of course. We all banged on the doors and hammered at the walls,” he recalls. A few days after that historic date, he was free again and from then on took part in the state’s rapid decline.

Hartmann was part of the hard core of the civil rights movement. He came from the mining town of Espenhain, where he had grown up surrounded by dirt and fumes. In 1983 he had come into contact with the Young Community at Leipzig’s Church of St. Nicholas. He was politically active from then on, including in the Initiativgruppe Leben (Initiative Group Life). He had been imprisoned as early as January 1989 for distributing leaflets for a counter-demonstration to the official march commemorating Karl Liebknecht and Rosa Luxemburg in Leipzig. In October 1989, Hartmann was one of the founders of Neues Forum (New Forum) in Espenhain, and soon became a councillor for the movement in his home town.

Udo Hartmann worked in the Espenhain open-cast mine up to June 1989. After that he was a care assistant, later training as a geriatric nurse and now working for the Inner Mission in Leipzig’s St. Martha’s House.
For twenty years now, Udo Hartmann has been fulfilling his wish for free travel. His most recent trip was to another faraway destination – somewhere in the Pacific.