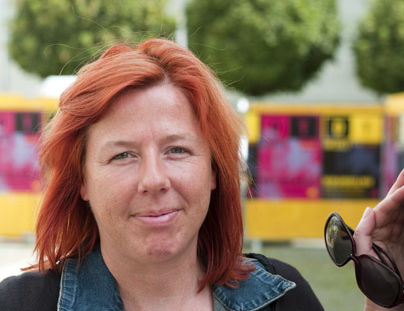 Sarah Jasinszczak grew up on Arkonaplatz in Berlin-Mitte. Her father, a convinced communist and police officer, did not have an easy time with his daughter. “I contradicted him a lot, asked a lot of questions and didn’t allow him much authority.” Sarah was interested in literature from an early age, particularly fascinated by Friedrich Hölderlin and the idea of feeling imperfect in perfect circumstances. She had an instinct for the imperfect and found it everywhere. “My political thinking came with the questions I had.”

At 15 she began going to the first blues masses and made friends with the long-haired non-conformers she met there. At school she talked about Rosa Luxemburg’s statement that the Communist Party of Germany (KPD) had made mistakes. Sarah felt that all human beings ought to admit to their mistakes. Her teachers saw that differently.

Sarah Jasinszczak was denied a place to study German Literature and trained to work in the export industry. But she had actually long realised that she wanted to take a different route, one that was only possible via the Church. There she met people who asked similar questions to her. She worked with people with mental disabilities at the Stephanus Foundation and trained as an occupational therapist. She became involved in the Weissensee Peace Circle, with her political focus on ecology. Sarah Jasinszczak wanted to inform people about the consequences of the reactor disaster in Chernobyl and the toxic waste dump in Schöneberg. She wrote articles for the Umweltkalender (Environmental Calendar), which brought her to the Berlin Environmental Library in 1987. Visitors could borrow literature there that was taboo in the GDR. Sarah Jasinszczak was one of the individuals whose energy ensured the opposition group managed to continue working in stormy times. They wanted public attention for their issues, writing protest declarations, printing flyers and underground magazines, organising events.

When her partner Andreas Kalk was arrested in 1988, the lawyer and Stasi informer Wolfgang Vogel offered them a chance to leave the GDR. “But leaving was never an option.” They wanted to spread their convictions in the country itself. In May 1989 she counted the votes at the local election and provocatively carried a large ballot box through the streets. She was arrested and held in Rummelsburg prison until four in the morning. By now pregnant, she continued to work on the lending desk of the Environmental Library. She organised vigils in the Gethsemane Church for those arrested on political grounds in Leipzig and other cities, but her fellow activists did not let her leave the building because of her pregnancy.

After the Peaceful Revolution, she had the feeling she could finally try out what was important to her in life. She and some friends of hers founded a rural commune and she studied drama teaching. She wants to make history something that young people can experience. “That way, they can learn to stand up to injustice.”