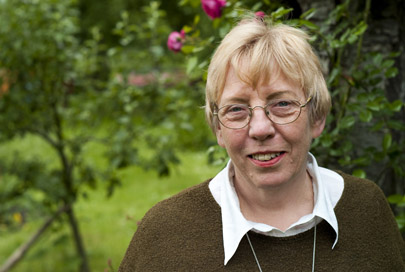 Almuth Berger’s parents were theologians and members of the Confessional Church during the Nazi regime. They taught their children by example how Christian charity can be implemented in real life. Guests from Africa or India often sat around their kitchen table, and the family respected different skin colours, cultures and religions. “Their openness had a formative influence on me,” says Almuth Berger, who dreamed as a 17-year-old of teaching children in Africa, but then chose to study theology in Berlin.

She married while still at university, her husband one of the first conscientious objectors to join the construction brigade. The church authorities were not keen on seeing a married woman in a pastorate, and so she was only able to take her second state exam in theology in 1975, by which time her three daughters had been born. In 1976 she followed her husband to Magdeburg, where she helped organise peace Sundays and ten-day church workshops for peace, and was active in founding the group Frauen für den Frieden (Women for Peace) in the city. “We wanted to encourage people and give them strength to stand up for peace and justice.”

Returning to Berlin in 1985, she took on the post of pastor at St. Bartholomew’s Church in Friedrichshain. Here too, she wanted to encourage and support people, create a forum for discussions and think jointly about how people could be raised to believe in peace. Artists such as Freya Klier and Stefan Krawczyk performed in her church, although they were both banned from public appearances in the GDR.

From 1986 on, there was a group of young Christians from Mozambique in the parish, and Almuth Berger originally merely provided a room for their church services. But regular meetings soon began to take place, for which she even learned Portuguese. In 1988 she and a group of young people set up the Cabana (Little Hut), one of the first regular meeting points for Germans and foreigners in the GDR, which spawned further such meeting places in other cities. The visitors were from Mozambique, Chile, Palestine and China. This gave them a chance to speak freely and openly to Germans, which was not officially encouraged.

In 1987, Almuth Berger played a key role in setting up the Initiative Absage an Praxis und Prinzip der Abgrenzung (Initiative for Rejection of the Practice and Principle of Separation), from which the grassroots movement Demokratie Jetzt (Democracy Now) emerged in the summer of 1989. The group not only denounced the restriction of freedom of travel by the Berlin Wall, it was also interested in living side by side with Germany’s neighbours in Europe, and in critique of separations within the Church and society. Intercession services for those arrested in 1988, election monitoring, integration of foreigners – for Almuth Berger, all these things went hand in hand. Being made responsible for foreigners in the last GDR government in 1990 and later in the federal state of Brandenburg was the beginning of the most intense and exciting period of her life, as she says.

Now retired, Almuth Berger is still active in her local parish and community, and she still wants to prompt people to do more for a just world, “because you have to look the facts in the eye.”