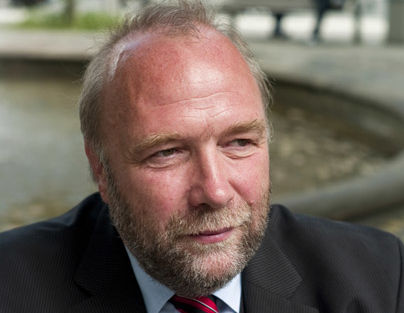 From the mid-1980s on, the physicist Günter Nooke was a member of a church opposition group in the Forst region that was committed to environmental protection, democracy and rule of law and published the samizdat pamphlet Aufbruch (Awakening). Nooke’s path in life was influenced by the Christian upbringing his parents gave him. As he himself once summed up, for him personally, especially in 1989, it was not all about words and texts, but more about deeds and actions.

In autumn 1989, he was one of the founders and assets of Demokratischer Aufbruch (Democratic Awakening), which he represented twice at the Central Round Table. In the freely elected People’s Chamber, his areas of responsibility included economic policy and the work of the Treuhand Agency in Berlin for administering former state-owned property, two very practical, eminently important fields of political activity in the unification process. At that time, together with other representatives of the left-wing liberals, Nooke had already left Democratic Awakening because this party was too unilaterally orientated towards the West German CDU party.

As leader of the parliamentary group Bündnis 90 (Alliance 90) in the Brandenburg state parliament, he was completely opposed to a fusion with the West German Greens, whom he found too left-wing and dubious because of their anti-unity course. In 1994, he was known to be a sharp critic of Manfred Stolpe, whose credibility Nooke questioned on the basis of Stolpe’s Stasi contacts. In 1996, he joined the CDU, along with other civil rights activists such as Vera Lengsfeld and Ehrhart Neubert.

Günter Nooke was in office as a member of the federal German parliament for two terms from 1998 to 2005, then Federal Government Commissioner for Human Rights Policy and Humanitarian Aid at the Federal Foreign Office, and since April 2010 he has been the German Chancellor’s G8 Personal Representative for Africa.