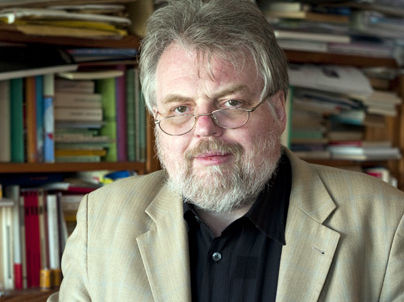 He is standing there with his arms folded and a look that is mischievous bordering on satirical. Behind him there are books and stacks of papers. He needs the paper chaos as much as other people need air to breathe. He always reaches for his piles of papers, pleased to help journalists if he can explain things to them, or tell them about the East German past or the impacts of the GDR on the present day. He maintains contacts with journalists and with the public, well aware that these contacts helped him out more than once in his life in the GDR. And he was not alone.

As a student, Lutz Rathenow founded the opposition group Arbeitskreis Literatur und Lyrik Jena (Working Circle for Literature and Poetry, Jena). This was banned in 1975, and the Stasi officers began to write a new work by the name of OV Pegasus (Operative Procedure ‘Pegasus’) instead, the alternative biography of Lutz Rathenow. He wanted to teach German and History. However, he was not only arrested in connection with Wolf Biermann’s expatriation, but also expatriated from his university, in other words, expelled.
When his book Mit dem Schlimmsten wurde schon gerechnet (Prepared for the Worst) was published in West Germany in 1980, the 28-year-old writer, then living in East Berlin, was arrested again and ended up in the notorious Stasi remand prison in Berlin-Hohenschönhausen. Following widespread protest in the West, Lutz Rathenow was released again ten days later. Thus, Lutz Rathenow had discovered the Achilles’ heel of the GDR authorities – and he took advantage of it. He also made use of his close contact with Jürgen Fuchs and others in West Berlin for other people, including his friends from Jena. His letters and articles led to protests and demonstrations of solidarity in the West. He had seen through the Socialist Unity Party’s game and enjoyed opposing them.

In March 1989, he was invited to Darmstadt to compete for the Leonce and Lena Prize for poetry. However, the GDR authorities only allowed Kurt Drawert and Rainer Schedlinski (an informer with a fixed monthly agent’s fee) to participate. They were both awarded prizes.

Lutz Rathenow never let things like that deter him. In the run-up to the Peaceful Revolution, he knew exactly what information and actions mattered. He had contact with Western journalists, embassy employees and friends in the West. And he chose the relevant information to pass on to the West about the situation in the GDR, and the West in turn passed this information on to citizens of the GDR. Then the information about this situation drove the citizens either out of the country or onto the streets.