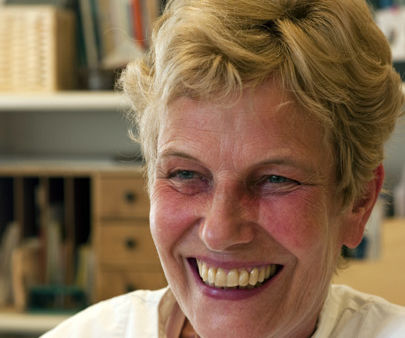 She likes to look at things from a different perspective and analyse them carefully. Eva Reich studied Medicine in Jena und Berlin and considered the GDR to be small and provincial. This will probably have had something to do with what her parents had told her, both disappointed communists who had ended up moving to the GDR from the Ruhrgebiet. Eva’s most fervent wish was to see other parts of the world. This led her and her husband to move to a small town of academics to the south of Moscow for two years. They learnt Russian and soon had Russian, Czech and Polish friends. Eva Reich felt she was part of a central European community with a shared past. Here, people thought beyond Germany and its borders.

The Freitagskreis (Friday Circle), a small group of friends meeting regularly in Berlin to discuss literary, philosophical and everyday topics, became ever more political after Eva and Jens Reich returned from the Soviet Union. During perestroika, Eva Reich read Russian newspapers and informed people about the changes taking place in the Soviet Union. With the wave of emigration from the GDR came the realisation “that we could no longer sit down together and analyse the situation”. One of their children had already gone to the West and the other wanted to follow suit.

Eva Reich and her husband had both read the book Der vormundschaftliche Staat (The Custodian State) by the dissident Rolf Henrich. They agreed with his theories and discussed his analysis. The Stasi listened in. The Reichs knew their flat was bugged. When Bärbel Bohley asked if the two of them wanted to come with her to Katja Havemann’s place in Grünheide to found a new initiative, they were willing.
The day after the founding appeal of Neues Forum (New Forum) in September 1989, there were already people who wanted to sign the appeal sitting on the sofa in the Reich family’s apartment. This marked the beginning of an intense period of giving interviews and responding to letters. During the daytime, Eva Reich discussed politics with her patients, in the evenings and at night there were discussions at home. The Reichs’ flat was turned into a kind of telephone exchange, with people from throughout the entire GDR calling to report their activities. There was a spirit of optimism in autumn 1989.

It was with mixed feelings that Eva Reich watched the negotiations at the Central Round Table, where civil rights activists discussed necessary reforms with representatives of the GDR government: “They did a lot of sitting around, a lot of talking, they did other things.” Something that was close to her heart was the free elections in March 1990, for which she and her friends had fought hard. Eva Reich took six weeks’ holiday for the Alliance 90 election campaign. After a very turbulent eighteen months, she set up her own surgery in 1991. Nowadays, Eva Reich is closely linked to the Friedenskreis Pankow (Pankow Peace Circle).