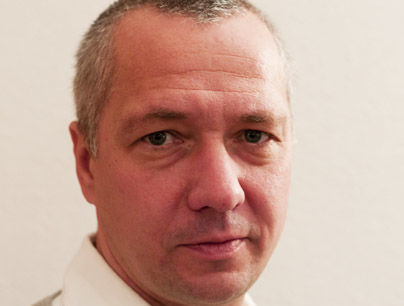 Mario Schatta is led by his sense of justice and relies on the fact that little strokes fell big oaks. When he was arrested by the Stasi for the first time in 1979 for refusing to remove the patch with the slogan ‘swords to ploughshares’ from his jacket, this triggered something off inside of him. “I didn’t want to be a cog in the machinery of this state any more.” Although he completed his apprenticeship as a carpenter at the Berlin State Opera, he decided on a second course of training within the Church. While preparing to work as a deacon, he became increasingly involved in peace work. Following on from this, as of 1983, he established the Protestant Peace Circle in Weissensee, which among other activities distributed flyers against armament in the two German states.

In 1984, he refused to do military service and informed the district conscription office that he would not join the construction brigade, either, although two years previously he had been prepared to do so. The construction brigade was part of the GDR army system and he didn’t like that. He was a pacifist. His response to the summons from the conscription office was that he wasn’t coming. When they turned up at his door, he slammed it in their faces. His final offer: he would be willing to do peace service. From then onwards, the conscription office left him alone. Some of his friends were not so lucky. He was well aware of that. However, especially with three children to think of, he was prepared to have the courage of his pacifist convictions. “That’s what I’m about. It’s part of who I am.” He was arrested several times, accused of spreading subversive propaganda, and hit with administrative fines he could never pay, as well as several criminal proceedings. He did not allow himself to be intimidated by all this. “I had no intention of accepting the restrictions the GDR state imposed on its citizens. And yes, a certain sense of adventure also played a part in it.” When Russian films were banned in 1988, he put up posters calling on people to boycott the cinemas, and he demonstrated against the ban of the Soviet journal Sputnik by distributing flyers.

After the local elections in May 1989, the Weissensee Peace Circle gained ever increasing support. The circle of people around Mario Schatta had critically observed the elections and shown that they were rigged. “We wanted to expose the lies so people couldn’t keep turning a blind eye.” He was arrested again at demonstrations against the election fraud. On 7 October, one of these demonstrations turned into the biggest protest in East Berlin since the popular uprising in 1953.

On 9 October 1989, he went to Leipzig for the Monday demonstration, although his flat was being observed by the Stasi. He escaped via the roof. Later he sat at the Round Table in Weissensee, helped to establish Demokratischer Aufbruch (Democratic Awakening) as a party, but jumped ship when he saw that ‘conservative elements’ were being cultivated.
Mario Schatta works as an organisational consultant and supervisor.