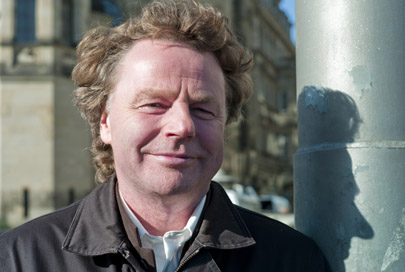 The whole of Germany stared spellbound at the pictures broadcast by the West German news programme Tagesthemen on 10 October 1989: 70,000 demonstrators marching through Leipzig and their chant, which took the city by storm: “We are the people”. Photographs of the Leipzig Monday demonstrations the day before. By watching Western television, millions of GDR citizens could see for the first time what the Socialist Unity Party (SED) leaders were concealing from them: that the resistance to their dictatorship had turned into a mass movement. Encouraged by this, people throughout the whole country now took to the streets – signalling the collapse of the SED regime.

The footage was taken by two young GDR citizens: Aram Radomski and Siegbert Schefke from East Berlin.
Siegbert Schefke did not initially have the profile of a typical opposition activist. After training as a construction worker with Abitur, he completed his military service and secured a place to study at the University of Civil Engineering in Cottbus. From 1985 onwards, he was a site manager for the Berlin housing construction collective, which was building large new housing developments in the East of the capital. He was leading a double life, however. From 9.00 till 3.00, he played a part in the “systematic construction of socialism”. Then, after work, he devoted his time to the Environmental Library at East Berlin’s Church of Zion, which became the meeting point and nerve centre of the GDR opposition as of 1986.

This did not go well for long. He had already been banned from travelling since 1985 and so was not allowed to leave the GDR. In January 1987, his boss took him to task. This was the last straw for Schefke, prompting him to hand in his notice and become a ‘full-time revolutionary’. Small print runs of underground publications such as the Umweltblätter (Environment Letters) were produced in the cellar of the Environmental Library. In a country where all the media were monitored by the regime, these were still no beacon of freedom of press, but a candle in the wind nevertheless.

One successful way of reaching more people was via the Western media. Initially through radio programmes that were produced in East Berlin, smuggled into the West on cassettes, and then broadcast there as Radio Glasnost on a private West Berlin network – which could also be received in the East. A much wider East German audience saw footage filmed by Schefke and Radomski with video cameras smuggled in from the West, which reached millions of people in the GDR via West German television. The illegal filming was risky, the topics explosive: environmental destruction in areas where brown coal was mined and urban decay in East German cities. Schefke and Radomski had deposited ‘confession videos’ in the West to be shown in the event of their arrest, but it never came to that. Although the Stasi monitored the underground journalists using informers, sabotage and obvious tailing, they never arrested them – either for fear of sanctions by the West, or simply because the SED underestimated the impact of these revolutionaries with television cameras. The day after the Monday demonstration in Leipzig, when Schefke’s television footage sparked off the revolution, the SED leaders realised they had made a big mistake.