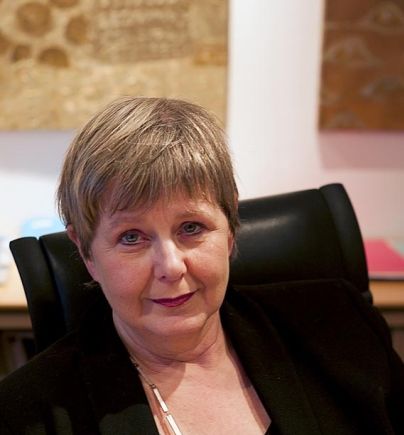 It was her charisma and rhetorical skills that made Marianne Birthler one of the best-known representatives of the opposition in October 1989. She spoke, for instance, at the large demonstration on Alexanderplatz in Berlin on behalf of the Initiative Frieden und Menschenrechte (Initiative for Peace and Human Rights) on 4 November 1989. In her prominent role as the longstanding Federal Commissioner for the Records of the State Security Service, she stands for the legacy of the GDR opposition to this day.

Despite leaving the Free German Youth, Marianne Birthler was able to take her Abitur exams, graduate in Foreign Trade Studies in 1972 and work in the GDR export trade. She gave up this job when her second daughter was born, but worked as a church volunteer instead. In 1976 she began training as a catechist and parish worker, going on to work in a Berlin parish. It was there that she came into contact with the very varied world of the opposition sheltered by the Church in the mid-1980s.

An active Christian, she was a founding member of the Arbeitskreis Solidarische Kirche (Working Circle Solidaristic Church) in 1986, an opposition group within the Church aiming for democracy not only of the Church itself but also in GDR society. From 1988, by this time working at the Berlin City Youth Pastorate, she was particularly involved in the Initiative Frieden und Menschenrechte (Initiative for Peace and Human Rights). When pupils were expelled from Ossietzky School in Berlin for political reasons, Marianne Birthler coordinated protests and helped initiate an alternative evening school for young people. She also worked hard to gain public attention and network the various opposition groups in Berlin and throughout the entire GDR. The instrument for this network was the Kontakttelefongruppe (Contact Telephone Group), which had found working space on the premises of the Gethsemane Church at the beginning of 1989 after a long search. After the violently suppressed demonstrations in Berlin on 7 and 8 October 1989, she was involved in documenting the events and publishing the information. In early November, she was a member of an independent inquiry commission to monitor the state’s half-hearted investigations and reveal police violence.

From March 1990, Marianne Birthler was the spokeswoman for the Alliance 90/Green Party group in the GDR parliament. In October 1990, she was elected into the Brandenburg state parliament for Alliance 90, becoming the education minister for the first coalition government. She resigned two years later over Minister-President Manfred Stolpe’s previous activities as a Stasi informer. Conflicted between loyalty to the cabinet and the need for criticism, she chose the latter. In 1993 Marianne Birthler became the spokeswoman for the newly founded Alliance 90/Green Party, and in September 2000 she took over from Joachim Gauck as Federal Commissioner for the Records of the State Security Service. Her second and final term of office expires in 2011.