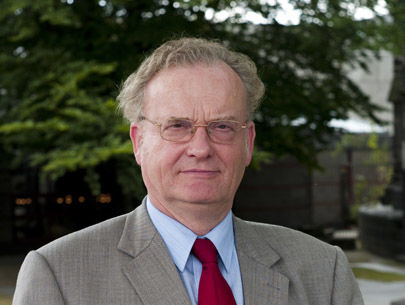 It was probably no historical coincidence that, after living in Halle and Merseburg, the theologian Friedrich Schorlemmer taught in the Lutheran town of Wittenberg from 1978 onwards and gave sermons at the Schlosskirche there. Although many people may not have thought so, he saw himself in the role of an enthusiastic follower of Luther. He repeatedly challenged the Socialist Unity Party (SED) state, but did not want to give up on socialism as the concept behind the GDR. Like his great mentor before him, Schorlemmer managed to rub everyone up the wrong way: the state, people on Protestant committees – from 1976 he had been a member of the synod – and also those in grassroots groups. He has always been unorthodox, precisely because he never blindly followed a doctrine if his own conscience did not allow it.

Friedrich Schorlemmer came to fame in 1983. Despite intimidation attempts by both the state and the Church, he was one of the pastors who continued to support the ‘Swords to Ploughshares’ movement. Earlier than many others, Schorlemmer rejected the concept of the Church in socialism. In September 1987 he spoke about the ruins of this concept and described a land whose hopes were also in ruins, as were its prospects for the future. In June 1988, Schorlemmer gave a speech at the Church Congress in Halle on behalf of the Wittenberger Friedenskreis (Wittenberg Peace Circle), which outlined the road to social renewal in 20 theses. He demanded reforms to the social structures. The present society was on the rocks. The state had to be persuaded to give up its claims to omnipotence and omniscience. A few months later, Schorlemmer demanded that in the GDR, too, there had to be a legal opposition like in Poland or Hungary.

It was almost inevitable that Friedrich Schorlemmer belonged to the small group of people who prepared the founding of Demokratischer Aufbruch (Democratic Awakening) from summer 1989 and then pulled it off in October. He became one of the figureheads of this party. On 4 November 1989, he was one of the speakers at East Berlin’s Alexanderplatz rally. In January 1990, he and several others left Democratic Awakening because it had become too conservative and was striving to align itself too closely with the West German Christian Democratic Union (CDU). Schorlemmer became a member of the Social Democratic Party (SDP).

He remained a controversial and contentious contemporary. In the last 20 years, too, he has constantly intervened in public debates. Schorlemmer is one of the few independent East Germans whose voice is heard throughout the whole of Germany. For some former GDR opposition activists, he has been like a red rag to a bull for many years, not least because he has called for a policy of entente with the radical post-socialist party Die Linke (The Left) – but never playing down the conditions in the GDR. In this respect, he has remained true to himself and to Luther: constantly interacting with the various sides, but without compromising himself. Friedrich Schorlemmer was perhaps more readily accepted in the new Germany than many of his critics.