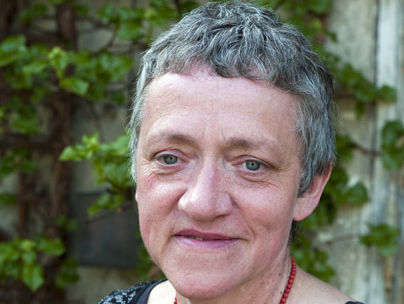 geboren 1950 in Brandenburg an der Havel

Jutta Seidel comes from a large rural bourgeois family who, despite appearing to conform, in fact lived a self-determined life. The father was a Neulehrer, one of the teachers trained rapidly by the Allies to help eradicate the vestiges of Nazism, and later became a head teacher. Her grandfather had a mill and saw mill, and her grandmother ran a small farm. At an early age, she felt the full weight of the state pressure on self-employed people, on her mother and grandmother who not want to join the cooperative farm, or on people who publicly declared their allegiance to the Church. Jutta Seidel listened to the Stones, showed an interest in the student movement in the West, and followed the invasion of Prague by Soviet troops in 1968 with horror. When she and her schoolmates were expected to cheer the homecoming of the National People’s Army soldiers, she refused. She wanted to test the boundaries and voice her opinion, influenced by Wolf Biermann’s critical songs.

While studying Dentistry, not only did she find support in the Evangelische Studentengemeinde (Protestant Student Community) but also food for thought. Sometimes guest speakers such as Stefan Heym or Reiner Kunze were invited. “That was my salvation, the atmosphere and the topics discussed. You didn’t get that anywhere else.” She no longer went to the big state celebrations and found that it was possible to refuse. She was on the receiving end of verbal abuse from the Free German Youth leaders, but that is all that happened.

Jutta Seidel began working in an outpatients’ clinic where she suffered from the ideological pressure prevalent there and the resultant dishonesty. When a friend asked her in 1982 whether she would sign a petition for the initiative Frauen für den Frieden (Women for Peace) against compulsory armed service for women, she was glad to have the chance to be involved. “I always need somebody to give me a push, and then I have a few ideas of my own about how to do something.” As well as nuclear threat, non-violent conflict resolution and peace education, the women had a whole range of topics which were critical of the GDR, and organised public church events.

Jutta Seidel built up contacts with members of the association International Physicians for the Prevention of Nuclear War (IPPNW) and, together with other colleagues, founded the working group Ärzte für den Frieden (Doctors for Peace) in 1983. She made IPPNW’s true objectives public, since they had been taken and reinterpreted by the GDR section that was blindly true to the Socialist Unity Party (SED).

In 1989, Jutta Seidel was one of the initiators of Neues Forum (New Forum). Together with Bärbel Bohley, she applied for official approval of this civil rights movement and provided the impetus for the big protest demonstration in East Berlin on 4 November 1989.

She does not see herself as being brave. “I did what I thought I had to do. And maybe we encouraged a few other people who couldn’t stand it any longer, either.” After having reached her physical limits with her extra-curricular work in AG Sicherheit of the Central Round Table in 1990, Jutta Seidel is now concentrating again on her career as a dentist.