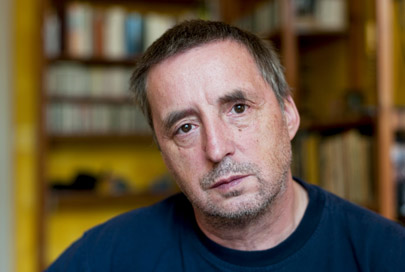 As one of the long-standing and most active members of the developing opposition, in the eyes of the state Wolfgang Templin had been among the most dangerous enemies since the late 1970s.

After completing his Abitur exams and an apprenticeship, Templin began studying Philosophy in Berlin in 1970 and joined the Socialist Unity Party (SED). Convinced of the concept behind socialism, he attempted to voice his criticism of reality through his involvement within the party. This also included his activities as a Stasi informer from 1973 to 1975. By the end of 1975, Templin had recognised the inhumane stiffness of the bureaucratic state he had devoted himself to and showed his true colours to his political friends. At the same time, he was involved in illegal Trotzkyist student circles.

The road from being a faithful communist to a democratic opposition activist was long. From 1976 to 1977, he spent some time studying in Warsaw, where he developed contacts with the Polish opposition movement, including the Workers’ Defence Committee (KOR). After this, despite subsequent travel bans, he was in touch with the intellectual and trade union opposition in Poland. Back in Berlin, he worked at Central Institute of Philosophy at the Academy of Sciences until 1983, while also active in the emerging independent peace movement. He left the SED in 1983. Templin was banned from his profession and then worked as a cleaner, lumberjack and boilerman. In late 1985, he helped found the Initiative Frieden und Menschenrechte (Initiative for Peace and Human Rights). From late 1987, he sought contact with the developing movement of people who had applied to emigrate to the West, because he saw them as partners to help fight against the SED. This caused a lot of controversy within the opposition groups because the relationship with those who were applying to leave the GDR was highly contentious among those who wanted to stay and oppose the regime.

Revealing his identity as an informer and leaving the party had earned Wolfgang Templin the hatred of the SED and the Stasi. They were even more resentful about his contacts in the West and the way he spoke openly and critically about the GDR through Western media. In late January 1988, he and his wife Regina were arrested. A few weeks later, with no trial or verdict, they were forced into temporary exile in West Germany, from where Wolfgang Templin remained in contact with opposition activists in other Eastern bloc countries and reported their activities to his friends in the GDR.

Immediately after the fall of the Wall, Wolfgang Templin returned to the GDR and represented the Initiative for Peace and Human Rights at the Central Round Table between December 1989 and March 1990. After the GDR parliamentary elections, he began to work for the Alliance 90 faction. In 1991, he was one of the co-founders of the Alliance 90 party, but left again in 1993 after they merged with the Green Party. He saw party discipline as an unacceptable shackle. Since 2010, Wolfgang Templin has been the Director of the Warsaw office of the Heinrich Böll Foundation.