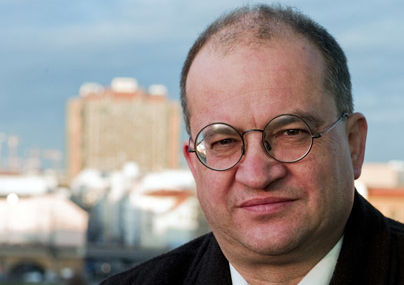 The Christian Democratic Union (CDU) member of the Federal German parliament has home leave or, in other words, the obligatory week of work in his Dresden constituency is just about to begin. His office is only a stone’s throw from the Dreikönigskirche where in November 1976 he organised one of the last public readings in the GDR, with Reiner Kunze presenting his deeply critical book Die wunderbaren Jahre (The Wonderful Years). Following this, the Stasi opened up the Operative Procedure ‘Primus’ against Vaatz. The name was well chosen because he likes to be at the forefront of things, he wants to make a difference. That is why he is an old hand now, a veteran of politics.

This father of four has always been able to find clear words. Vaatz passed his Abitur exams in Greiz, studied Mathematics in Dresden, worked in the GDR chemical engineering industry, was imprisoned from 1982 to 1983 because he refused to do his military service as a reserve officer, and then had to slave away in the Unterwellenborn steelworks. In 1989, he joined the Neues Forum (New Forum), became a member of the Dresden Gruppe der 20 (20 Group) and, when the Peaceful Revolution remained peaceful, he wondered: “Where do I fit in?”

One thing was clear to Vaatz: it was not with the civil rights activists and their continuous protests. And not with the Liberals. Vaatz was not a fan of Genscher. The Green Party? Not for him, he didn’t want to fuel fear of nuclear disaster. With the SPD? No, their discussion about the German question annoyed him. So there was only the CDU left. The German chancellor was primarily to blame for Vaatz’s future political career: “Helmut Kohl’s approach to the German question was for me the only right decision,” Vaatz recalls. He broke away from his former allies and on 20 February 1990 became a member of the Christian Democrats. When his party won over 48 percent of the votes in the first free elections in the GDR on 18 March, not only did Vaatz know that he had done the right thing, but also that the Germany unity he wanted was a done deal.

The young member of the CDU was much talked about. At the end of April 1990, he published a draft constitution for Saxony he had worked on. He became deputy government plenipotentiary of the Dresden region and prepared the founding of the Free State of Saxony. Vaatz, now a ‘traitor’ to many people, planned Saxony’s new ministries, writing the job advertisements in cooperation with partners in Baden-Württemberg. At the district council, where he had his office, there were clashes. There was no carte blanche for former staff. Everyone had to send in an application. “Preventing the resurrection of the old apparatus and managing to develop a new ministerial administration took a tremendous amount of effort,” Vaatz recalls.

He still puts his heart and soul into his work as a politician although the euphoria of twenty years ago is over. And he still finds it “extremely” annoying that most of the victims of the Socialist Unity Party (SED) regime have not emerged as victors but instead more than a few former leading party members have turned things to their advantage.