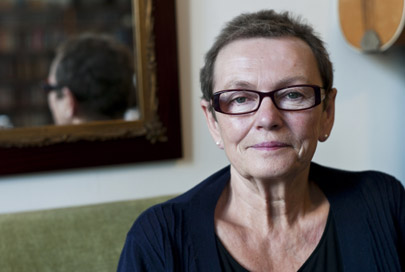 Bärbel Bohley at the end of her lifetime. She is sitting on the green velvet sofa in her flat in Berlin’s Fehrbelliner Straße. She seems tired, weakened by cancer. If you look carefully though, you’ll notice the sparkle in her eyes, her subtle smile. Her esprit, always thinking outside the box, her laugh that levelled all hurdles and swept people along. In the mid-1980s, she became one of the public faces of the East German opposition. This small blonde person with her quiet, girlish voice, locked up in the stuffy state of the aged nomenclature, gave interviews to television journalists from the West – one of the few possible ways of reaching people in her own country. A trained artist, she put in simple terms what so many people in this grey country thought. She said that the GDR violated human rights that were normal in a civilised world on a daily basis, and she openly demanded freedom of speech, freedom of assembly, freedom of travel, free elections and free media. She came across as completely unafraid; she was completely unafraid. She set an example, encouraging countless people to rebel against the GDR regime.

In September 1989 she founded Neues Forum (New Forum) with friends and fellow campaigners. The founding appeal, by the name of Awakening 89, began with the legendary words: “Communication between the state and society is obviously dysfunctional in our country.” Towards the end, it read: “We are therefore forming a joint political platform for the entire GDR, which will enable people from all professions, walks of life, parties and groups to take part in the discussion and handling of key social problems in this country.” The reaction was overwhelming. Strangers from all around the GDR called her to tell her that demonstrations were taking place in their towns and that people were now daring to take to the streets. Bärbel Bohley became a central figure, and her apartment on Fehrbelliner Straße in Prenzlauer Berg became a hub of the Peaceful Revolution.

“It was like living in a railway station back then,” she recalled at the end of her life. A constant stream of people came to her flat while she coordinated contact between the groups protesting around the country, growing in number on a daily basis. She called these few months “the best time of my life”. “We were on an absolute high 24 hours a day, we were walking on air, we were bubbling over with ideas.” And people simply trusted her. Just as in her numerous aid projects in the Balkans in the twelve years following 1996, she had a talent for bringing the right people together at the right time and for taking action. And she had a fundamental faith that things can be straightened out. Like no other, Bärbel Bohley embodied the charisma of this revolution of 1989. She dared to trust her heart – the very first.