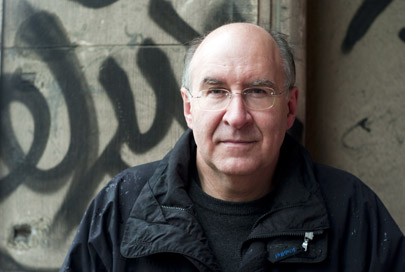 He could put a finger on life in the GDR – literally. Just before the ‘local elections’ on 7 May 1989, in fact a meaningless ritual, in the television programme Kontraste (Contrasts) broadcast by the free West Berlin station Sender Freies Berlin (SFB), Peter Wensierski demonstrated how to vote ‘No’. Viewers could see his hands as he neatly crossed out every name on a GDR ballot paper individually. This was the only way to make sure that your vote was not counted as valid and in favour of one of the government-backed National Front candidates. Since such ballot papers were not to be found in West Berlin, Wensierski had copied a printed voting slip from an East German textbook, cut out the copy, and so he had his ballot paper.

By then, the politically active journalist had already been banned from travelling to the GDR. It had been clear to the Stasi for a long time that Wensierski could not only literally get to the Socialist Unity Party (SED) system, but also figuratively. His Stasi files include the remarkably accurate statement: “According to Wensierski, the SED has only a limited capacity for reform.” Since 1979, he had often travelled to the GDR for various media. Earlier than most Western journalists, he realised on his expeditions to the other Germany just how bad a state the GDR was really in. He did not restrict himself to opposition activists in the Church hierarchy and mixing with unorthodox communists. Wensierski looked much more at the punk scene, at environmental and peace groups or artistic circles. More and more frequently, he had the impression that people were “sick of the GDR”.

“As a travel correspondent, I enjoyed more freedom than my accredited colleagues. For instance, I didn’t have to specially register every trip outside East Berlin or every interview. That was a loophole in the system,” Wensierski recalls. However, he also still remembers that in the 1980s it was not easy to arouse the younger West German audience’s interest in the people on the other side of the Wall. So the SFB soon proved to be an ideal medium for Wensierski, especially its German-German news programme Kontraste. In many parts of the GDR, it was almost obligatory viewing for critical thinkers. For many years, often in close cooperation with opposition activist Roland Jahn who had emigrated from Jena, Wensierski reported on groups critical of the SED, thus making the civil rights activists well known in the GDR via West German television. Here, a crucial role was played by the camera crews who filmed on site at a great risk to themselves, for example, in Leipzig.

Since the Peaceful Revolution, which he gave a voice to at an early stage, Wensierski has remained loyal to reappraisal of the past for a long time, including with films about the Stasi. He has also done a good service to children in care homes by bringing their suppressed stories out into the public arena.