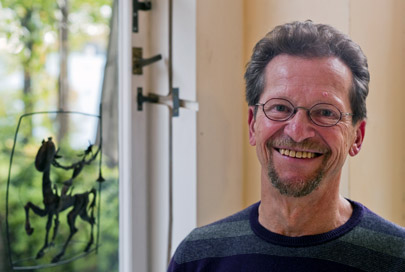 Christoph Wonneberger, former pastor and coordinator of the Leipzig peace prayers, is sitting crossed-legged and perfectly relaxed (again) on the couch in his Fockeberg apartment in Leipzig and reflecting upon his life.
For this Christian and peaceful revolutionary, his biggest moment came on the morning of 30 October 1989. It was largely thanks to him that at the time 200,000 people demonstrated peacefully on Leipzig’s inner city ring road, chanting, among other things, “We are the people”. On this particular Monday, however, Wonneberger collapsed with a stroke.

Aged 45 at the time, his stroke was a bolt out of the blue and he lost his power of speech as a result. His rehabilitation was difficult and Wonneberger had to relearn everything almost from scratch. The stroke left its mark, but through sheer willpower he managed to reincarnate himself.

In the summer of 1968, Christoph Wonneberger had experienced the heated days of the Prague Spring on the Vltava and distributed underground flyers there. It hit him hard when his high hopes of freedom were crushed. He did not lose courage, however, and learned Polish to enable him to show solidarity with the Solidarność movement, and he was active in Dresden in the early 1980s. He and the Weinberg community there were behind the Sozialer Friedensdienst (Social Peace Service) initiative, which inspired a network of peace prayers throughout the whole of the GDR. In 1986, he founded the church Arbeitsgruppe Menschenrechte (Working Group for Human Rights).

Wonneberger was the initiator of the peace prayers. Up to August 1988, these had been allowed to take place at Leipzig’s Church of St Nicholas – until the pastor received a letter from the Church leaders: “Dear brother, [...] I am writing to inform you that you are released from your current duties.” The Socialist Unity Party (SED) state was no longer afraid to touch the Christians. Wonneberger: “Even the Church was to be an executive body of the power apparatus. But I wanted no part in it.”

Such a rebellious spirit would not allow himself to be muzzled. And on 25 September 1989, when there was a peaceful outcome of the revolution only in people’s wildest dreams, he spoke again in St Nicholas’s: “Stasi apparatus, hundreds of police, dogs are just paper tigers. So don’t be afraid.” Then 2,000 people sang We Shall Overcome to reassure themselves before proceeding out of the church. The crowd of 6,000 people in total caught the state powers by surprise, even managing to go a few hundred metres to Leipzig’s inner city ring.

Many people still say to this day: “Wonni, you were our main man.” He is dismissive of this high praise, refusing to either confirm or deny it – but all too well aware that, during times when hardly anyone dared even think about the Peaceful Revolution, not many other people were prepared to take such risks. For it was always important to him to make everything public. After his experiences, does Wonneberger still believe in justice on Earth? “Of course. It is in justice and truth that my inner strength lies.”