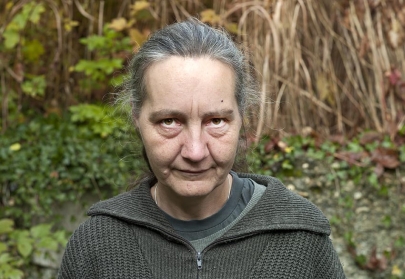 Growing up in western Saxony, Antje Böttger learned at an early age from her family that “the sky doesn’t fall in if you protest in a dictatorship.” Her great-grandfather, for instance, had been consciously demoted from the authorised signatory of a textiles factory to a sexton because he refused to join the Nazi Party to secure orders from the army. When Antje was faced with the question of either distancing herself from the Church or taking her Abitur exams, the answer was obvious to her. She left school and became a nurse.
In 1978 she followed her husband Martin to East Berlin and had five children over the course of seven years. Their apartment was large, and there was always someone at home because of the children. In a country where very few people had a telephone so that short-notice visits couldn’t be announced, the flat soon became many people’s first port of call. And as everyone was given a friendly welcome, the opposition activists came in droves, with occasional visits from the West as well. Antje’s kitchen table became an important communication centre.

So it’s difficult to say which groups she was a member of and which not. She definitely belonged to Frauen für den Frieden (Women for Peace) and the Initiative Frieden und Menschenrechte (Initiative for Peace and Human Rights). Since everyone came to her, however, she was a valued facilitator when it came to resolving arguments and discussions within opposition groups. “Berliners have a habit of behaving like villagers,” is her laconic description, “and at my place, the members of the various Berlin villages had to put up with all sitting together.”

Yet she also took care of other important matters, for example, distribution of underground magazines, which she transported inconspicuously in a pram underneath her youngest child. She arranged how to get hold of paper for printing various opposition publications. In 1989 the large separate flat in her parents’ house in Cainsdorf near Zwickau became vacant, and the family moved in. Only weeks after their move, Cainsdorf became a central hub of activities. Her husband Martin was one of the founders of Neues Forum (New Forum) in September. Once again the house was full of visitors, once again there was plenty to organise. In her family’s house on the hill, Antje practically ran the New Forum office, answering letters, making phone calls and taking care of setting up the actual offices in the districts. Once she had done that and there was a representation of New Forum in every district of the (then) borough of Karl-Marx-Stadt, she simply gave up the job. She never had any political ambitions.