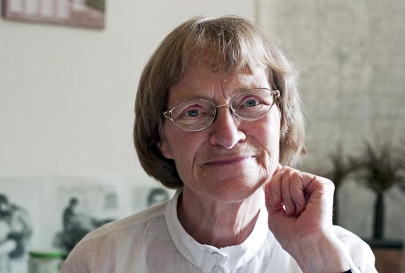 With perseverance, but a peacemaker – that was Erika Drees’ way. Her whole life long, she saw it as her task to make the world a more worthy place, always feeling obliged to Christian values. Her work made her one of the most important opposition activists in Stendal and beyond. Peace, justice and preservation of creation were significant topics for her long before the Ecumenical Assembly of Churches in the GDR made them their principle in 1988.

During her Medicine degree in Kiel and West Berlin, she was active in the Protestant Student Community and began discussing with East Germans ways to reunify Germany. That landed her in the Stasi’s “Red Ox” prison in Halle (Saale) for eight months in 1958, even as a West German. Nevertheless, she moved to the GDR to work as a neurologist in 1960, met her husband there and lived in Stendal with her family from 1976 on. Alongside her medical work there, she was one of the initiators of the local peace circle and the Energiewende-Gruppe (Energy Change Group), which used civil disobedience and non-violent actions to protest against the construction of a nuclear power station near Stendal after the reactor accident in Chernobyl.

Once it became known that the local elections in the spring of 1989 were rigged, and East German politicians justified the brutal suppression of the Chinese democracy movement, she and her friends organised prayers for peace from July 1989. Shortly afterwards, she was one of the first to sign the founding statement of Neues Forum (New Forum), openly propagating the movement in Stendal. Citations to the local police and fines did not stop her – she had lost her fear of repressions during her first term in prison. She became a driving force for awakening and renewal in the region, and her home developed into a central port of call for people seeking information and encouragement.

She thought globally in all that she did. At the first officially registered demonstration in Stendal on 6 November 1989, she called for free elections, freedom of the press and opinion, and for truthfulness in all areas of life, while also calling to mind the poverty and suffering in the Third World. And she acted just as straight-forwardly and bravely as she spoke. When the local Stasi office was occupied in early December 1989, she kept guard in the building overnight so that it was not left to the police alone.

Despite the fall of the Wall and the end of the Stasi, she continued to focus on the nuclear power station. On 10 December 1989, the Energy Change Group set out to cut a hole in the fence and attach a roll of wallpaper with 3,000 signatures against the further construction. Erika Drees was sentenced to a fine, which she refused to pay. She served the sentence in the Stasi prison again, followed by further court appearances.
Neither in the GDR nor in reunified Germany could punishment stop her from doing what she thought right. She turned down all decorations and honours offered to her.