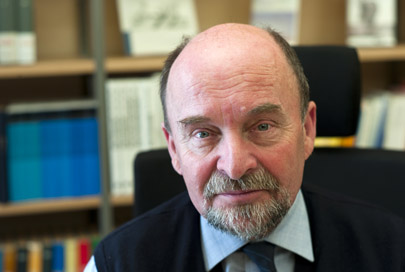 Giving up was never his style. Whenever Rainer Eppelmann was really sure of himself, he stayed true to the decision he had made without compromise. He was a conscientious objector in the 1960s, imprisoned in Neustrelitz prison and the Uckermünde military penal camp for eight months. In the 1970s he was an opposition-minded youth pastor in Berlin and in the 1980s he graduated to public enemy number one. In 1990 be became first a minister without portfolio in the last GDR cabinet under a Socialist Unity Party (SED) head of government, then the only ever disarmament minister in the world, during the 1990s a prominent social politician, and then in the new millennium the most important champion for reappraisal of the East German past.

From 1979 on, young people came in droves to the youth pastor Eppelmann’s blues masses in the Church of the Good Samaritan in Berlin-Friedrichshain. The services with blues music expressed their aversion to the socialist nanny state. Only the Church, the only relatively autonomous institution in the GDR, was able to offer this freedom. The blues masses became the nucleus of a freedom and peace movement and thus of a broad opposition in East Germany.

Eppelmann aggravated the state even more by drawing up the Berliner Appell (Berlin Appeal) with the unorthodox communist Robert Havemann in 1982. For the bureaucrats of the SED, this plain statement against the open militarisation of GDR society was a declaration of war. Erich Honecker ordered: “The responsible organs shall arrest the ringleader, a certain Eppelmann, for 1. organisation of a petition, 2. formation of an illegal organisation, 3. collaboration with foreign anti-GDR forces, 4. anti-GDR agitation abroad, 5. anti-Soviet agitation.”

However, public attention for his case – i.e. from the West – had him set free after only a few days in a Stasi prison. From then on, he was a key target for the Stasi; their considerations ranged from “demoralisation” to murder plans, all to silence this uncompromising pastor. Yet they did not succeed; Eppelmann remained one of the most outspoken critics of the SED regime. When the revolution picked up speed in the summer of 1989, he was one of the founders of Demokratischer Aufbruch (Democratic Awakening) and was later elected chairman. When the Wall fell late on 9 November 1989, Eppelmann was in the front row at the Bornholmer Strasse checkpoint – but he did not cross over to the West on that night of all nights. He stayed put, because he felt obliged to the Peaceful Revolution. The same applies today. As the voluntary chairman of the board of directors for the Federal Foundation for the Reappraisal of the SED Dictatorship, Eppelmann is at the interface between the academy and the public, between funding and personal commitment.